Last week’s international property fair MIPIM wasn’t just for developers and councils, it was also for those who help developers lobby councils. Four Communications is one such company. It says it offers teams of experts who “provide support at every stage of the planning, marketing and communications process” and helps to secure “political support in the face of public opposition”.

Who are these ‘experts’ able to magically gain the ‘political support’ of council members in developments facing public opposition? Well, who better than council members themselves?

The South Bank’s King’s Reach Tower provides a good example of how Four Communications’ lobbying service works. In 2010, Developer CIT employed Four to ‘help’ get permission for its controversial 41 storey Blackfriars development. This is how Four’s 4 step lobbying process was implemented:

Every major planning application requires a Statement of Community Involvement (SCI) to demonstrate that the developer has consulted with the local community and that its plans have public support. Four has helped developers obtain permission and produced SCIs for an impressive list of (social housing-free) developments in Southwark. The table below provides links to the SCIs created by Four for each of the following developments which it helped obtain permission: 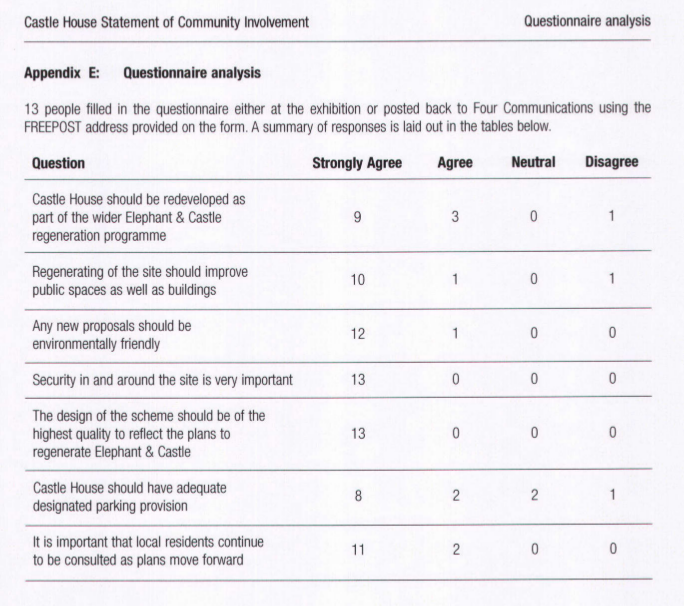 See page 19 of Strata Tower SCIAnother working example is Strata Tower, which shows what a sham Four’s SCI consultation process is: its consultation showed that it had consulted just 13 people - hardly evidence of widespread public support. Unsurprisingly most of these agreed to the vague and narrowly-framed questions aimed at restricting any kind of meaningful consultation:

The planning application was duly nodded through and Strata Tower - entirely without social rented housing but complete with useless wind turbines - was built. 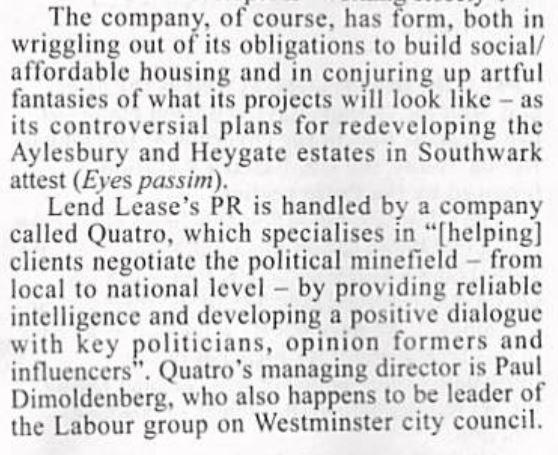 Private Eye (issue 1380 - 25 Nov 2014)It is worth noting that the council’s E&C regeneration partner Lend Lease, is absent from the list of Four’s clients. That’s because Lend Lease employs a different PR company called Quatro to handle PR for its developments. It’s also worth noting that Quatro’s Managing Director Paul Dimoldenberg, is a former senior Southwark council officer and current leader of the Labour group on Westminster city council.

As covered in a previous post, Southwark’s former Lib Dem and Conservative leaders have shown no greater integrity and are both now helping developers obtain planning permission for developments in Southwark. But what makes the Labour leaders’ double-dealing particularly dangerous is their political strangleholds in Southwark and Lambeth: the lack of any opposition party provides the leaders with a free hand to wave all these developments through unscrutinised.

Southwark and Lambeth’s corrupt Labour clique has given a whole new meaning to the New Labour mantra of “inclusive prosperity”.