There has been a lot of crowing by Council Regeneration Boss Fiona Colley recently, about how many jobs the regeneration will bring.
In her letter published in last week’s Guardian, she claims that the regeneration will deliver “5,000 jobs, giving local people genuine opportunities to develop skills and earn a decent income.”

She was subsequently busy on Twitter asking if anybody was interested in ‘getting paid to demolish the Heygate’ : 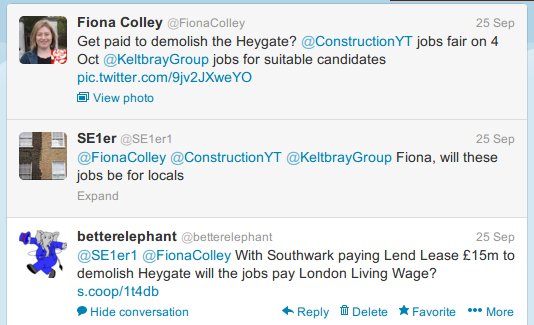 One user replied to Cllr Colley with the question ‘will these jobs be for locals?’ Better Elephant pointed out the fact that Southwark is paying £15m to Lend Lease to demolish the estate, and asked whether the jobs would be paying the London Living Wage?

Cllr Colley failed to respond to either question.

The questions are pertinent in view of the large sums of public money flowing into what is essentially a private development. Southwark has already spent a total of £65m in just emptying the estate and progressing its redevelopment^1; it is about to spend a further £15m paying Lend Lease to demolish it, and the question of whether any of this will flow into the hands of local people after Lend Lease and Keltbray have taken their cut is a valid one.

In finding an answer we could look at a case study example of how regeneration contracts have benefited local people so far:

According to this FOI request, Southwark council has spent £1.28m on private security for the Heygate estate over the past 4 years. We don’t have an exact breakdown of the costs, but we do know that in April 2008 a contract was awarded to a company called ‘Safe Estates Services Ltd’ to provide regular night-time security for the estate in exchange for the sum of £13,500 per month. Companies House records show that Safe Estates Services appears to be a special purpose vehicle set up specifically for the Heygate contract: company accounts show that it has no employees, pays no tax, and is a subsidiary of VPS Holdings Ltd, which is in turn a subsidiary of TDR Capital LLP. 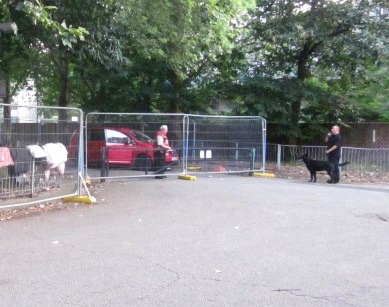 Further investigation reveals that Safe Estates has simply subcontracted the entire contract to another firm ‘Lapa Security Ltd’, which is based in Swanley, Kent and which according to its website offers “comprehensive security recruitment services in Orpington, Bromley, Swanley and Dartford.” . Lapa then entrusts the Heygate contract to its self-employed security guards on zero-hour contracts. The self-employed security guards comprise one dog handler with his own vehicle and dog paid £9 per hour, and one security guard without a dog who is paid £6.30 per hour.

If we multiply the hourly rates by the 7x11 hour night shifts, we find that from the £13,500 per month paid by the council, less than a third is ending up in the hands of the actual contractors on the ground. The lion’s share of the contract sum is skimmed off by a number of middle men in the form of tax-avoiding holding companies and sub sub-contractors - each taking their cut.

The £6.30 per hour wage is also well below the London Living Wage of £8.55 per hour, to which Southwark as one of only 9 boroughs in London committed to sign up last year. It even specifically committed to extend this also to contractors and agency staff.

Whatsmore, on September 30th Lend Lease took possession of half of the Heygate site. Lend Lease has subcontracted the demolition of the next phase of the estate to a company called Keltbray, who have subcontracted the security of their compound to a company called Clipfine. It has also emerged that Clipfine is failing to pay its security guards the London Living Wage, despite the fact that the Heygate planning application’s legal agreement binds Lend Lease into ensuring all its contractors and subcontractors are paid the London Living Wage^2:

Of course this legal agreement is worthless without a council willing to enforce it, and without a council-backed investigation it is very unlikely that any subcontractors will come forward, as they run the risk of being permanently condemned to a construction industry blacklist.

So it looks like the Elephant regeneration is going the same way as Lend Lease’s Olympic Village development where despite all promises workers were also routinely found being paid less than the London Living Wage.

Furthermore, during the whole six-year duration of the contract, not one security guard employed by Lapa under the council’s contract has been a Southwark resident. So is this what Cllr Colley means by “giving local people genuine opportunities to develop skills and earn a decent income”? Or is it just yet another example of her administration’s propensity to make countless meaningless promises and statements?