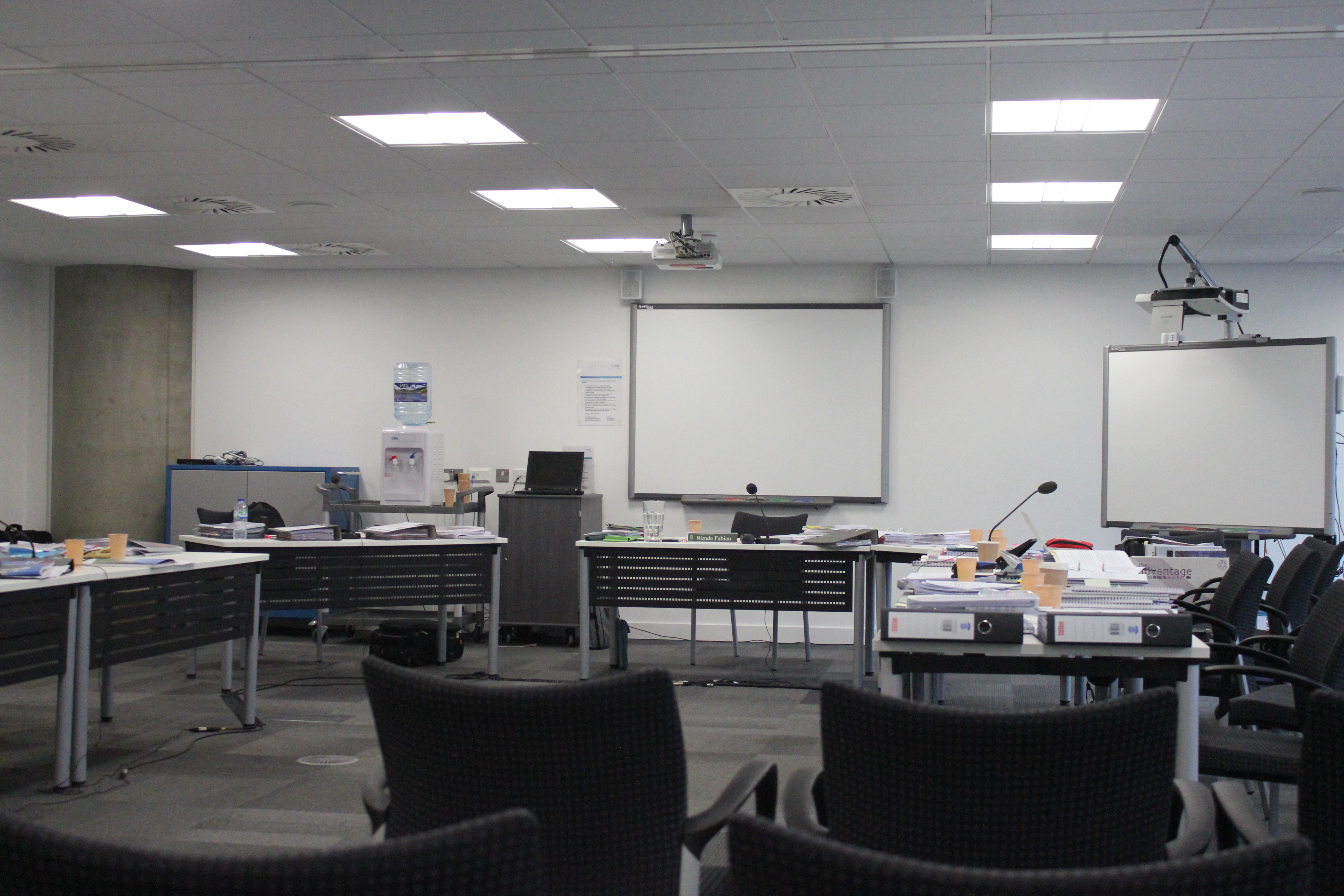 The Order was confirmed today after a six month wait following the four day inquiry, which took place during 5th - 8th Feb. The inquiry was triggered when remaining leaseholders on the Heygate estate objected to the Order, which will see them dispossessed of their homes to make way for the £1.5bn regeneration scheme being undertaken by the council and its development partner Lend Lease.

There were a total of 10 objectors to the Order, including the Crossway church located on the estate plus a number of local residents and community groups. The objections broached a number of themes including lack of truly affordable housing, loss of trees and claims that the plans had been altered from the original regeneration objectives to the extent that they were no longer in the public interest.

The objectors lead by the Heygate Leaseholders Group, pointed out that tenants on the estate had not been given the opportunity to object, as those who objected had simply been subjected to eviction proceedings under the 1985 Landlord & Tenant Act. They also pointed out that the scheme amounts to forced displacement - as the council had denied Heygate residents a ballot on whether their homes should be demolished. Several former Heygate residents gave evidence at the inquiry objecting to Southwark’s heavy-handed approach when the decant was brought forward in 2007 - 1 in 3 secure tenants were subjected to eviction proceedings[1], and its failure to honour promises to residents that they would be able to move to new homes on the estate footprint: the new ‘affordable’ units will be at the new ‘affordable rent’, which will be at least double the level of council rents. Just 1 in 5 secure tenants on the estate have managed to stay living in the SE17 postcode, the rest have been scattered across the four corners of the borough and beyond:

The objectors were also supported by academic expert witnesses who gave evidence showing the negative effects of displacement on the community, and produced data showing how the development plans - if passed - would create a far less mixed community at the Elephant & Castle (just 8% social housing in total). 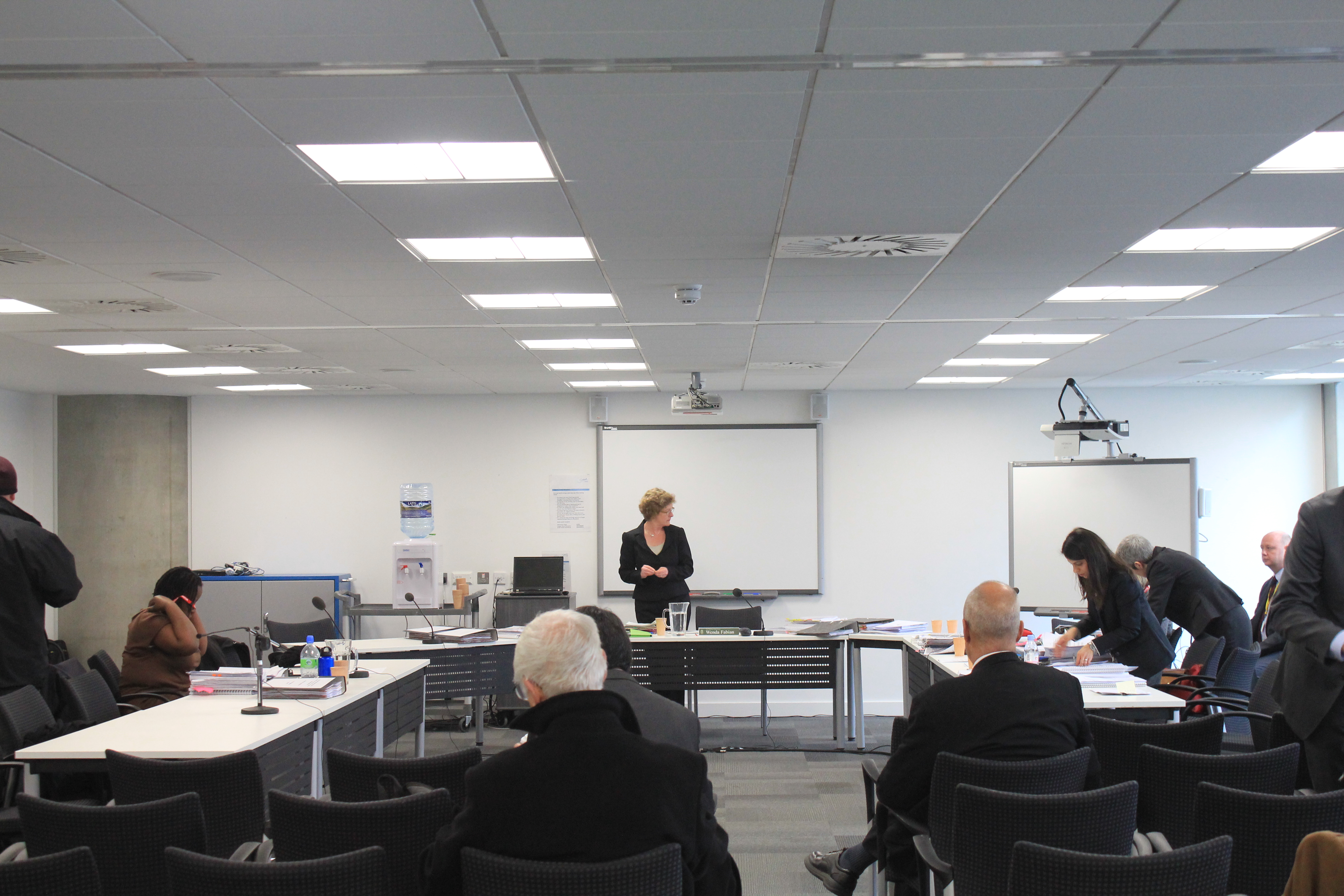 Among the expert witnesses giving evidence were:

Other witnesses giving evidence in support of the objectors included members of local groups Better Elephant and the Elephant Amenity Network, Catherine Croft from the Twentieth Century Society and Tim Tinker the original Heygate architect.

In his submission, Tinker who spent 7 years drawing up the Heygate scheme in the 1960s said the following: “The Heygate and its design has been stigmatised and I thought it was time to set the record straight. Its notorious reputation is a farrago of half-truths and lies put together by people who should have known better.” [2] Tinker also pointed out that the original 1970s Heygate redevelopment had been based on providing homes for those displaced from a specific neighbouring slum clearance area (what is now the Newington estate). The original scheme he claimed, had kept the community together whereas the current scheme he said, had seen residents “scattered to the four winds” .

Michael Edwards who is a senior lecturer in the economics of planning at UCL’s Bartlett School of Planning said “What is called ‘regeneration’ typically has perverse, unintended, negative effects of displacing precisely those people whose deprivation was taken as the justification for regeneration.” [3]

Lorretta Lees, who is Professor of Human Geography at King’s College London and an international expert on gentrification and urban regeneration policy said “The development plans do not acknowledge the social mix already present on the estate, nor do they address issues of social sustainability. They deploy a language of social balance in the service of social exclusion. The rhetoric is about social sustainability, but confirmation of the CPO will lead to social segregation.” [4]

In her witness statement, former chair of the Heyate Tenants and Residents Association Helen O’Brien described the redevelopment plans as a miserable failure - “What was once a thriving community has now been scattered all over Southwark. Southwark’s regeneration plans are a miserable failure. Everyone who has worked on the regeneration at the Elephant should be thoroughly ashamed of themselves.”

During the inquiry objectors produced detailed statistics including a 1998 Stock Condition Survey and a council-commissioned Options Appraisal Study, which had made recommendations for large parts of the estate to be refurbished as part of the redevelopment. They also produced a detailed analysis by global architects Gensler, showing how the estate could be refurbished and modernised at the current cost of just £14k per home.

Crime statistics were also tabled by objectors in response to the council’s claim that the bad design of the estate led to it becoming a “by-word for social failure, crime and anti-social behaviour” . The figures showed that the crime rate on the estate was a staggering 45% below the borough average.

Former Heygate Leaseholder Terry Redpath travelled in from Sidcup to give evidence at the inquiry. His submission highlighted the plight of leaseholders, many of which had been forced to relocate outside London with the low compensation paid for their homes - “I could no longer afford to stay in the area - the compensation I was offered plus £45,000 of life savings bought me a terraced property 15 miles out of London. I have been forced to give up my home to accommodate the building of homes for overseas investors.” [5] Redpath, who lived on the estate for 35 years and whose family have lived in the area for generations, went on to highlight the shortcomings of the consultation process:
“Consultation was a farce - the council kept insisting that 94% of local residents supported the redevelopment plans, but we later learned that this was 94% of just 6% that had responded to the survey. They had originally promised us a ballot on whether the estate should be demolished but we never got it - it has been completely undemocratic.”

The google overlay map below shows the extent of displacement suffered by Heygate leaseholders as a result of the regeneration scheme: 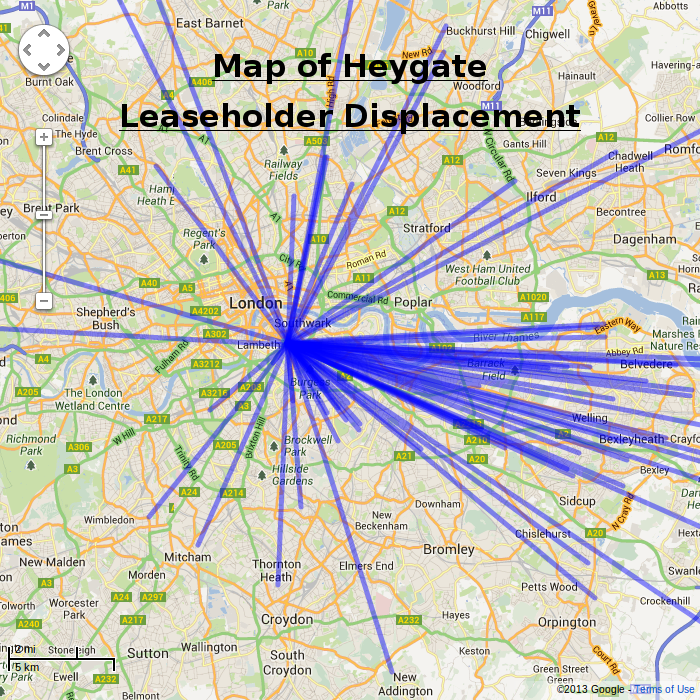 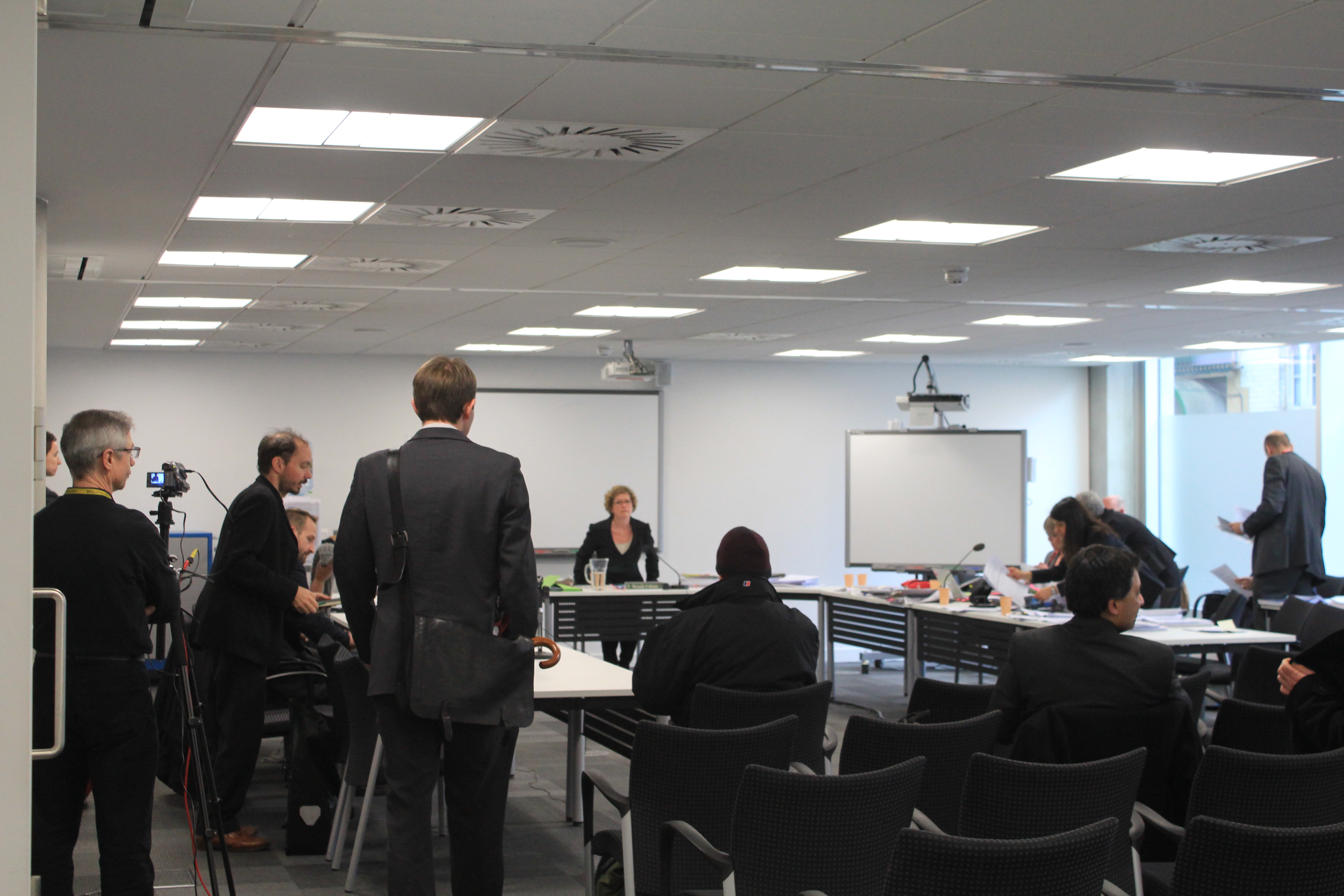 Remaining leaseholder and statutory objector Adrian Glasspool said “We have simply exercised our right to say no. This is a privilege that tenants on the estate didn’t have - 198 of whom were forced to leave their homes under the shadow of eviction proceedings.”“An entire community has been forcibly displaced for the sake of mere land value speculation.” 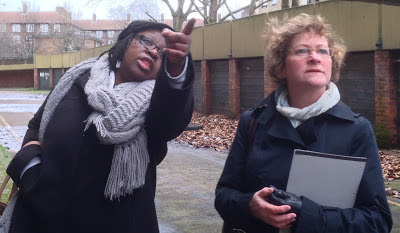 Remaining leaseholder and statutory objector Mojisola Ojeikere (left in the photograph accompanying inspector Wenda Fabian during the site tour) said “We were originally promised a range of options in assisting us to buy one of the new-build Heygate homes[6], but this promise was never honoured - now we are being shortchanged and priced out of the area: I am being offered just £150,000 for my 2 bed flat, when the new-build 2 bed Heygate flats are currently being marketed overseas for upwards of £455,000 [www.trafalgarplace.com]. How am I supposed to buy one of these with the miserable amount they are offering me for my home?”

When objectors asked at the inquiry why they didn’t get the new homes originally promised, the council’s lead officer replied “I don’t know, I wasn’t employed by the council at the time the promises were made. But I am sure Lend Lease would be willing to sell to anyone” :

Analysis of information received through FOI requests, shows that the average compensation received by leaseholders for a 1 bed flat on the estate was just £95,480.

Southwark Council is estimated to have spent around £3m obtaining the Compulsory Purchase Order.

The council’s case documents submitted for the CPO can be downloaded here, and a copy of the Objectors’ Statement of Case is available here. A short audio recording of objectors giving evidence at the inquiry can be downloaded from here.

[6]: See also paragraph 26 of the 2005 Leaseholder Policy and paragraphs 4 & 33 of the Executive Report - ‘Heygate Estate Decant Arrangements’, 18 May 2004: “Council Executive agrees to develop housing options for leaseholders whose interests will be acquired as part of the main scheme, including shared and retained equity arrangements. The negotiation of shared ownership retained equity schemes for people to buy a share in a higher valued property will form part of the procurement exercise to select housing association and developer partners.”